UNBROKEN NEEDED TO BE BROKEN 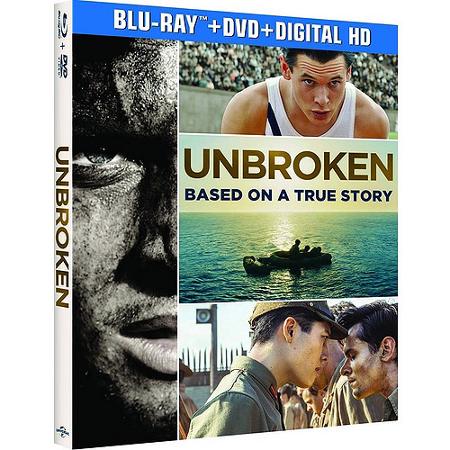 Universal Pictures releases the Unbroken film, based on the late Louis Zamperini, on DVD and Blu-Ray today. Directed by Angelina Jolie Pitt, the film is an adaptation of Laura Hillenbrand’s book, Unbroken: A World War 2 Story of Survival, Resilience, and Redemption. To the world, he was an Olympic champion, war hero, and survivor of unbelievable horrors. To the faith-based community, he was a humble servant and an example of forgiveness personified.

Zamperini grew up as a rebellious and troubled child in an Italian family in Torrance, California. At the urging of his older brother, he channeled his energy into distance running, eventually becoming an unlikely competitor at the 1936 Olympics in Berlin, Germany, with Adolf Hitler presiding over the events.

During World War 2, Zamperini was deployed to the Pacific theatre as a bombardier. He had several close brushes with death, but nothing could be more harrowing than being lost at sea, along with 2 fellow crewmates, for 47 days.

On the 47th day, Zamperini and one of his crewmates were captured by the Japanese Navy. Zamperini was tortured and beaten by the Japanese guards. One man, Mutsuhiro “Bird” Watanabe, took perverse pleasure in humiliating and trying to break Zamperini. It wasn’t until the end of the war in August 1945 when Zamperini would finally return home as a war hero.

When Universal announced Jolie Pitt would direct the film, I had no doubt she would effectively craft a film faithful to the salient points in Zamperini’s life, particularly the suffering at sea and at the hands of the Bird. Jolie Pitt, though raised in what I call the tinsel tower of Hollywood, has experienced her own fair share of suffering.

She endured her parents’ painful divorce in the public eye, only to marry and divorce twice in her twenties.   She lost her mother to ovarian cancer and has been very public about her own preventative double mastectomy. On this same day as the Unbroken DVD release, Jolie Pitt has written an Op-Ed piece about a cancer scare and a subsequent decision to have her ovaries removed.  http://http://nyti.ms/1G9WOaD

As a United Nations High Commissioner for Refugees, she’s traveled the world and met with and interviewed countless victims of war, rape, violence and atrocities most of us will never experience in our lifetime. She’s a compassionate humanitarian, speaking on behalf of people who have no voice. In essence, she was more than qualified to portray Zamperini’s suffering and triumph on screen.

As a filmmaker, Jolie Pitt surrounded herself with the best artists in cinematography, special effects, music composition, among others. Jack O’Connell is perfectly cast as Zamperini and even Takamasa Ishihara brings the right amount of professional cruelty to his role as the Bird, tempered by his strangely innocent face.

As in the title of Hillenbrand’s book, the film delivers the “Survival and Resiliance” portion of the title. We spend almost too much time drifting at sea with Zamperini and his crewmates to the point of experiencing their fear and hopelessness. The film gives an unflinching look at some of the cruelty Zamperini suffered at the hands of his captors and the Bird, but it also fulfills its title: Zamperini doesn’t break in captivity.

Unfortunately, the film falls short on delivering the most powerful part of Zamperini’s story: the third act, or the “Redemption” part of the book title. The film’s end was abrupt and emotionally unsatisfying, especially to those who have read Hillenbrand’s book or known about Zamperini’s life. Simply presented in title cards at the end of the film, we learn that Zamperini suffered from PTSD after the war, had a spiritual awakening, and forgave his captors, including the Bird. The end.  No justice.  No retribution.

Zamperini’s journey had only begun when he returned home from the war. After he married, Zamperini suffered from severe PTSD in the form of alcoholism and nightmares. He was obsessed with seeking revenge against his captors, fantasizing about killing them. His wife had decided to divorce him, but then her attendance at Billy Graham’s evangelistic crusade in Los Angeles changed her life: she became a Christian. She chose not to divorce her husband, but asked him to attend the crusade with her. He reluctantly agreed. Eventually, Billy Graham’s message and the passage on the adulterous woman from John 8:1-11 proved to be irresistible.

Zamperini heard the Gospel message: he understood how broken, bitter and angry he had become. He understood he was not superior to the Bird when standing before a holy, perfect God. He was broken beyond human repair, but not beyond God’s reach and forgiveness. By the next evening at the crusade, he committed his life to Christ.  From that point forward, his nightmares ceased and he forgave his captors.

The film would have enjoyed more success if it had taken its audience through the final leg of Zamperini’s journey.  Jolie Pitt stated, “We had to condense sections, but we didn’t leave anything out.”  She and Universal Pictures underestimated the power of forgiveness as a plot point.  By omitting the “Redemption” or forgiveness portion of Zamperini’s story, they ignored the bedrock on which the Christian faith is built as well as the most powerful weapon used against any enemy.  As filmmaker Scott Derrickson stated, “The best real world plot twist is forgiveness.”

It’s possible Universal learned its lesson or read the numerous secular and faith-based reviews lamenting the omission of the most important part of Zamperini’s life. Accompanying today’s DVD / Blu Ray is a special LEGACY OF FAITH bonus disc with 90 minutes of content from Zamperini, Billy Graham, and Greg Laurie as well as other resources for faith-based leaders.  This disc will undoubtedly share the rest of the story to help satisfy viewers who may crave a sequel.

Unbroken failed both Zamperini and the faith based audience by omitting his conversion story. Hollywood continues to make similar mistakes in other faith-based films as I discussed in my previous post http://https://sonjapiperdosti.com/why-hollywood-and-faith-based-filmmakers-are-still-out-of-touch/.

I look forward to the day when Hollywood produces an Academy Award caliber film for the faith-based audience without compromising artistic integrity and watering down a faith-based message.  It’s a win-win for us all.